The Power of the Sun

11 Jul The Power of the Sun

Posted at 17:47h in Bearly Surviving Archive by sitemaster
0 Likes 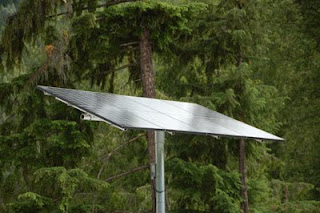 It’s been a quiet dream of ours ever since we moved to the wilderness: to run a truly eco-friendly operation mostly powered by the sun.

Of course these days every man and his dog is ostensibly eco-friendly, green-minded or otherwise hitched to the faddish bandwagon of environmental conservation.

I know of glamorous Canadian “eco-lodges” set in pristine wilderness which run huge diesel generators 24 hours a day to meet the demands of their profligate ways.

Indeed, before we came here Kristin and I were environmental middle-of-the-roaders, neither skeptics nor evangelists.

Living in Russia the notion of being an eco-activist would have been about as attractive and unusual as becoming teetotal.

But after moving into our new wilderness domain, we gradually began to became won over to the notion that we should try and preserve our little piece of paradise.

When the snow finally left we found freezers dumped at the end of the garden and huge piles of discarded batteries and oil filters.

And so fired up on our new-found eco-fervour, we gradually we began to convert our place to a model of green living.

We introduced a serious recycling policy, bought a super-efficient fridge for thousands of dollars and several high-efficiency water heaters.

We put in composting units, low-flush toilets and bought a new fancy rotating clothesline so we didn’t have to use the clothes dryer in the summer.

We even got worms. A few thousand happy red wrigglers live in a plastic box in the kitchen where they eat everything from junk mail to coffee grinds to vegetable scraps. And they don’t even smell.

For all our efforts, however, there remained one outstanding environmental earsore. We still needed our trusty old Kubota generator to produce the power to charge the batteries that ran the lights.

And although it didn’t run 24 hours a day – in the end we were down to two or three – it’s deep tut-tut-tut-tut was still an audible offense to the aims we had set ourselves.

And so, last weekend, we finally bit the eco-bullet and installed eight beautiful new solar panels that will catch the rays of the sun and turn it into bankable electricity.

For four years we have been debating the move. Unlike many European countries, Canada provides little in the way of incentives or rebates for renewable energies.

Financially it didn’t make a huge amount of sense when there were so many other priorities that need attending to.

But we both felt strongly that cutting down on our diesel emissions was a cause worth paying for.

In the grips of a global recession and with the British economy in the doldrums – many of our guests are Brits – this did not seem like an auspicious year for major investments.

But with hot and mostly dry summers it has been so frustrating year after year watching all that energy go to waste.

So we finally brought in Lars, a great guy who runs a renewable energies company in the Okanagan valley and has been coming to the ranch since shortly after we opened.

The year before last he helped us put in a Danish well-pump, and we have also added two efficient new inverters in recent years and made several other minor improvements.

With the help of Sunny, our friend and neighbour, we had the whole new solar system mounted, installed and running in less than a day.

Clearing up took a little longer. Sadly we had to fell three trees that were blocking sunlight from the new panels.

Cutting them down was the easy part. Limbing them with the chainsaw, clearing away the branches and bucking up the trunks took another day or so.

Now, however, as we mark a week since the panels went up, we are kicking ourselves that we didn’t make the move earlier.

All our power usage, from the fridge and freezer to the lights, and the dishwasher to the satellite receiver that brings in our internet signal, is provided by the sun.

Each day Kristin and I watch our power meter like the energy nerds we have become. At night the batteries run down, but by mid afternoon they are back at close to 100 percent.

Of course it helps that BC has been in the grips of a heat wave. The week has seen several temperature records set in the province and the dogs have been panting under the sundeck.

In the winter, when the sun is low and weak, the panels won’t give out the power they are now (power output peaked at around 10kWh on Tuesday for the technical amongst you).

But we use a lot less electricity in the winter and so the yearly patterns work well for us. For heat in the winter, we use wood which we cut up and split ourselves.

So now the only thing outstanding on our energy balance is propane which we use for our high-efficiency water heaters and cooking.

And, of course, petrol. With two large vehicles we are still using a fair amount of that, but we try to keep our cars fairly full when we are guiding which reduces emissions per person.

And when we’re not out with guests we use our battered 20-year-old turbo-diesel Land Cruiser, a resilient beast, covered in dog hair, which just keeps running.

The generator shed, meanwhile, is now in a growing state of neglect. And the tut-tut-tut-tut of the Kubota is becoming a dim memory.

Eco-do-gooders that we are, we are both struggling not to feel just a tiny bit smug.

Pride, so the saying goes, comes before a fall. And in the wilderness, falls can be dramatic. Watch this space.