Staying for the winter

14 Dec Staying for the winter

Posted at 20:28h in Bearly Surviving Archive by sitemaster
0 Likes 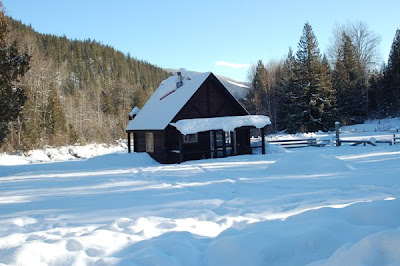 It’s official. A wilderness milestone to celebrate. A baptism, if you like, though not of fire, more of ice and snow.

Since arriving in our remote valley nearly three years ago we have, despite our struggles, been viewed by the more fibrous of the mountain men that live around us as something of outsiders, townies even.

Part of the problem is that we drive a purple SUV and not a pick-up. It doesn’t help that we don’t hunt. Neither of us drink American Budweiser and we mostly drink organic beer – hippy juice to the redneck.

But the most condemning facet of our existence, one that stands head and shoulders above all our other sins in local eyes, is that each winter we pack up and head out.

Never mind that for the last two years we have headed north not south and spent the cold months not in the Bahamas but in that unlovely northern city, Anchorage. For the diehards that matters not a bit.

Of course this is Canada, not the US, and even that saltiest locals are too polite to say rude things to our faces. But we can see the looks, hear the mumbled comments.

Each time we head into the local village (an hour’s drive on an icy road along a frigid lake) we are greeted with the words: “Heading out again for the winter?” or “Off somewhere nice this year?”

The comments somehow rankle and behind the smiles we often half-suspect a mixture of pity (Ah… They’re not up to it!) or smug condescension (Of course our winters are tough. Aren’t you?).

Well. I’ve got news for the mutterers and old-timers. This year we will not be heading out of the valley. We are – I almost feel a lump in my throat as I say the words – staying for the winter.

So what’s the big deal, you might ask. It’s not exactly the old days when you laid in your provisions in October and didn’t open the cabin door, except to trap marten and mink, until May.

There are no armed prospectors and thieves roaming the hills and the nasty beasties of the forest are all nicely tucked up in their winter dens.

Well, that’s true, but in some ways, it is a big deal. First of all there is the snow.

Of course I’d seen snow before we came to Canada.

I’d struggled across the cold blown plains of Siberia in February past the ruins of Stalin’s gulags and caravanned through the Afghan Hindu Kush in January with gunmen for company.

Some of the places I have been have winter temperatures several tens of degrees lower than the place we now call home.

But nowhere I have seen in a life of wandering, nor even imagined in the most raw and exotic dreams, have more snow than we have here.

We have buckets of the stuff, truckloads, whole mountains of white that creep into every crevice and fill every hole. Sometimes it falls relentlessly for day after day after day.

At times it is light, powdery and playful as a kitten – at other times wet, heavy, stolid. When it melts and then refreezes it turns into immoveable ice formations that require a pick or better to dislodge.

Then, of course, there is the isolation. Highway 31, never a magisterial transport artery, turns into an icy track – a tenuous thread that struggles to keep the valley connected to the world.

Every day or so, it is true, a huge yellow plough – all flashing lights and scraping metal – appears like a pre-historic animal and does battle with the encroaching white stuff.

But as soon as it has passed the snow once again begins to mass, squeezing our lifeline to the south, our supply of fuel and groceries and our physical route out of this arctic hide-away.

When the road is impassable there is of course the satellite. Our internet and telephone connection are both channeled through an 18 inch dish perched on the back of our house.

But during heavy falls that too gathers precipitation and reception slowly fades to nothing. The only option then is a red-blooded trek through waist-high snow to scrape the dish free of its icy crust.

If our systems fail – and they always seem to die during the coldest days of winter, never during the far-off warming days of summer – we fall back on the basics: firewood, candles, warm clothes.

So why, you might ask, go through all this? Why not head out? South? West? East? Anywhere with better infrastructure and a gentler climate?

The answer, I suppose, is simple. The winter, for all the trials that it brings, is just gorgeous: a time of year to be embraced and relished.

It is a time of unearthly quiet, knitted pullovers, long hours by the log fire and beautiful sunny days when the entire valley sparkles as if host to a celestial light.

Today I walked with the dogs down to a bend in the river a few miles to the north of the ranch. (It is the place we take our guests to look for grizzly bear and wolf tracks in the sand in the autumn.)

There was two or three feet of snow on the ground and nobody had been that way since the latest fall. As I snow-shoed down towards the river I saw fresh deer tracks and some small scat, probably from a weasel or some other mustelid.

For a while I stood and just stared at the sparkling water, the snow and the sun on the distant peaks. It seemed incredible to have all this beauty in one place, and with no one else for miles around.

When darkness begins to fall – and dusk is now coming around 4pm as we approach the shortest days of the year – we retreat to sit in front of the fire. Sometime we watch a European art movie that we have been saving up, other times we read.

Every Wednesday evening Sunny, a treasured neighbour who lives a mile or so to the south, comes over. Kristin cooks something and we drink wine and play the guitar. (He’s teaching. I’m learning.)

Olli, who lives a little further down the valley on 500 acres of cleared forest, drops by some dark evenings to tell us his stories of 30 years spent in the Canadian bush with grizzly bears, elk and wolves.

At other times we take up a neighbour’s invitation to party, chuck a chainsaw, some snow chains and a couple of six packs into the back of our Land Cruiser and head south through the blustering snow.

Once a week or so we make the two hour drive into Nelson, the nearest town of any size and home to an eclectic collection of hippies, loggers and left-wing radicals, to take in provisions and meet up with friends.

Not to say they are so wedded to the wilderness that we never leave.

Next week we will be departing on a trawl through Europe – our annual pilgrimage to catch up with old friends and families – that will take in England, Wales, Hungary and Estonia.

We’ll leave the dogs with friends in the village, drain the water, shut off the power and let the snow slowly engulf everything.

But by mid January we’ll be itching to be back again. The rush, the bustle, the rudeness of the big cities makes for a pleasant visit, but a poor place to live a life.

Anyway, friends, guests and colleagues, the wilds are calling. Time to put down my pen and don my hat, gloves and boots – and take up a shovel.