Posted at 07:05h in Bearly Surviving Archive by sitemaster
0 Likes 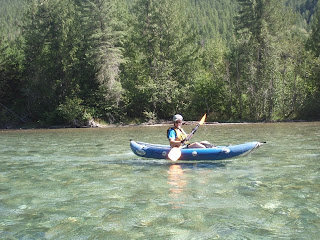 For the first year or two after we moved to our quiet, secluded valley we were content to just sit and watch the beautiful blue-green river flowing at the end of our garden.

Each day it was a different beast, sometimes dark, feisty and turbulent, at others almost translucent and gentle, with just the smallest of whitecaps hinting at the hydraulic pull below.

Of course, human nature being what it is, it wasn’t long before we (or at least I, the male component of this wilderness duo) wanted to do more than just sit and watch.

I needed a more intimate connection with this strange being that was the heart and soul of our new ecosystem, the draw for the salmon, the bears and the wolves.

A few weeks after arriving, I waded the river with my brother, a foolhardy endeavour that could have led to an early drowning. That clearly was not going to be the best avenue of engagement.

I briefly thought about fishing, but it seemed a shame to try and catch the giant rainbow trout and graceful bull trout, and it is, in any case, strictly illegal to fish our highly-protected river.

So after months of discussion we finally settled on rafting. What an excellent way to enjoy the water, floating the current, peering into the stony depths, battling with the rambunctious rapids.

And for more than three years since, to rave reviews, we have offered our guests a rafting trip down our beautiful river.

Of course there are horses for courses. Some of our visitors have trembled at the merest sight of a riffle while others have paddled the raging white water (well almost raging, it’s only Class 2-3 at its craziest) without breaking even a sweat.

Naturally, to take charge of such an activity, I need training. I got that at the hands of a bunch of fast water cowboys in a 10-day course in southern Alberta that nearly killed me.

Surrounded by twenty-something-year-old kayak enthusiasts, who had been bouncing around in rivers since they could crawl and swam like windmills, I felt like an old donkey forced to train for the Epsom Derby.

I somehow made it through despite an unpleasant few seconds on the bottom of a particularly fast river, caught between the heavy boat and some sharp rocks.

And then I returned to our more modest waterway to introduce our guests to the joys of the water. In the last three years I have probably run the river more than 100 times.

My log book, which in the beginning I meticulously filled out, adding comments, distances, guest names, and even the weather, has long been gathering dust in a corner.

I remember when I first started flying aeroplanes wondering at the old pilots who has long stopped recording their hours and thinking how cavalier they were.

Which is not to say that I no longer enjoy the river. I love it, breathe eat, eat it, drink it. In the winter I crave its wilderness feel, it’s gentle ministrations, its total seclusion.

But other than the first wild run of the year, when I gather a small posse of friends and neighbours and we cut our way down with a chainsaw, it rarely gets my heart racing.

So, though I am hardly ready to hang up my paddle, Forest, one of our excellent wilderness guides, has now taken over some of our river trips. This week he made his first run down the river alone with the guests.

He has made the run several times before, but I have always been there like a clucking mother hen, making tiny course corrections, interfering with his briefings and generally cramping his style.

This week, as Forest made his first solo maiden voyage, I was three hours drive away taking a my Canadian citizenship test. (More about that some other time.)

Needless to say his trip went seamlessly. He safely delivered his charges back to the ranch with barely a few drops of water on them.

With a strong background in kayaking and other water sports, and a wiry and capable physique, I really needn’t have worried.

As for me, I will still be taking many of the rafting trips. It is something I love and miss acutely during the winter months.

But I am also branching into another water sport: kayaking. I have dug out an inflatable kayak I got from a friend several years ago and last weekend tried to run the river in that.

With two friends from Nelson, Chris and Daiva, we set out in our little flotilla mid morning in scorching heat.

They did the proper Canadian thing and, emulating the voyageurs who first came to Upper Canada to buy furs from the Indians, took a two-man canoe. I, less gloriously, bounced down in my blow-up sit-on-top.

We all made it down without tipping. I fought a slow puncture in my kayak with a hand pump and we stopped for a shore picnic about half way down.

But when we came to the rapids, discretion being the better part of valour, we swapped our flimsy craft for the trusty white water raft, the marine equivalent of a Hummer.

What a great day. Next time I may even take my little kayak through the rapids. And Kristin, eschewing the natural caution of her Estonian tribe, has hinted she might join me.

We’re even ordering a doggie life jacket, aiming to make it a family affair. Masha and Karu have had a few preliminary swimming lessons in the river with Kristin.

The day we all make it down the river in one piece will mark our graduation from water newbies to river folk. I’ll keep you posted.