Posted at 20:06h in Bearly Surviving Archive by sitemaster
0 Likes 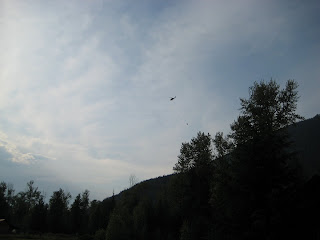 Whoever said that living in paradise was going to be easy?

Not if the weather has anything to say about it.

The year began with an onslaught of thick, white powder snow that crept up over our sundecks to the lower reaches of the windows and then up, up and up steadily towards the roof.

When that melted – and locals say that even in this notorious snowbelt it was the most they had seen for years – our beautiful turquoise river began an interminable rise until it had all but engulfed our road.

The day before our wedding in June, Highway 31 – the misnamed goat track that runs up our valley – was blocked completely a few miles to the north. It was almost underwater to the south.

Happily our guests ignored the overcautious signs pronouncing the road closed and, veterans of the impossible that many of them are, ploughed on regardless until they reached the ranch.

Perhaps our most serious setback, however, came the very evening of the wedding when several feet of our riverbank, eroded by the swollen waters, collapsed and disappeared into the swirling turmoil below.

Drunk on cider and high on love, that evening we barely noticed.

But during the days to come and after a painstaking examination of the bank that involved lots of leaning and poking at odd angles we realised we were facing a serious erosion problem.

If that wasn’t enough, since the beginning of this month the sun has set out to wreak havoc too. Not to be outdone by the other elements, it beat down on our little ranch for two weeks straight without respite.

This weather is uncommon in the Kootenays region where we live and certainly untypical of our valley where sometimes we have three different types of weather at the same time.

As the sun continued relentlessly, the temperatures rose to record levels. Our little thermometer in the kitchen window peaked at nearly 55 degrees centigrade, more redolent of Baghdad than British Columbia.

Our beautiful luxuriant lawns began to wither, our myriad birds panted with their mouths wide open and our dogs retreated to suffer like baked beached whales under the house, emerging only after sundown.

Even at night we suffered. Our log house usually keeps fairly cool but this time it seems that all its natural arboreal defences capitulated in the face of the relentless solar onslaught.

Just as it seemed things could get no worse the storms arrived.

Not nice cumulonimbus pregnant with precious rain rushed straight from the cooling Pacific but harsh electric storms with gigawatts of lightning and very little moisture.

The forest to the north and south of the ranch began to burn as lightning cut deep into its parched boughs and branches. At one stage, a week ago, we had three fires within five miles and another half a dozen within 20 minutes drive or so.

With the fires, mercifully, came the firefighters and their helicopters. Descending to scoop water from our river into huge buckets they hovered over the smoke like angry wasps from dawn to dusk.

Living as we do, in the bush, we are beyond the remit of the fire brigade and will have to rely on a trusty old Honda water pump to fight the flames should they ever reach our land.

Last weekend we watched enthralled and more than a little worried as smoke billowed apparently out of control on a hillside less than two miles away.

Taking a leaf out of the book of our unflappable neighbours, we remained stoic and, with a couple of stalwart friends, drank vodka late into the night.

Last night the storms returned with a vengeance. All day our high speed wireless internet (we’re not complete Luddites out here in the wilderness) had been flashing warnings.

“Severe thunderstorms. Hail. Take precautions,” the BC weather service ordered. What are they thinking of? I wondered. What is one to do when the mother of all storms is on its way? Nail down the front door? Tie down the dogs?

In the event it was quite a weather event. First the internet connection went down. Then the picture on the television imploded and the screen went dark. A blanket of lightning enveloped the sky driving away the night.

Then the wind began to howl and the rain and hail arrived. Huge great lumps of it thudded onto our sundeck and the metal roof of the house. The dogs began to howl. We stood enthralled, hearts pounding.

For a moment I wondered about the fate of our horses. I even thought about dashing to the rescue. Kristin looked at me quizzically. I think the same thought struck us both at the same time.

Whatever the hail would do to the horses’ rear ends it would do twice as badly to my head. Like a first world leader faced with an ethically-sound but politically-painful course of action, I retreated.

As I write this all is now back to normal in our little valley. We have had one of those delightful Kootenay days – all fine rain, mysterious banks of mist, gentle sunshine and even a rainbow. The hummingbirds are back in force.

The temperature outside is a respectable 20 degrees and at one point this afternoon we actually had rain at one end of the yard and sun at the other. Delightful.

It’s true that – to coin a phrase – we’re not quite out of the woods yet. Some of the fires are still nibbling away at our forests and the helicopters are still flying. Somebody muttered darkly about a scorcher tomorrow.

This morning I met a man who did venture out in the hail last night and for his pains took a chunk of ice on his shoulder. He told me it hurt like hell.

Now who, I thought to myself smugly, would try a stunt like that when the God of Thunder is tossing boulders around the heavens?