From Skid Row to the Suburbs

16 Mar From Skid Row to the Suburbs

Posted at 19:05h in Bearly Surviving Archive by sitemaster
0 Likes 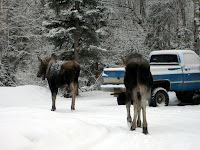 I admit it was an impetuous and poorly-judged decision.

I had just arrived in Anchorage for my annual teaching assignment at the University of Alaska and the temperature was twenty-plus degrees below freezing.

I spent the first night at a sleazy motel not far from the airport. The walls were thin, the carpets reeked of old cigarette smoke and daylight seemed to come and go within the blink of an eye.

After months surrounded by the magnificent Selkirk mountains, fast-flowing rivers and gorgeous vistas at our wilderness home in British Columbia, I felt caged, miserable and desperate to get out.

When an apartment became available I jumped at the chance. It was small. It was expensive. It was uncomfortable. It was garishly decorated with the worst of faux Alaskan kitsch.

But I simply couldn’t bear the motel so I took it and handed over an unwisely large fistful of e-dollars through an online payment system to a smooth-talking agent.

The very first night in my new residence I realised I had made a mistake. Not 20 yards from my bedroom windows was a busy highway. Cars, trucks and lorries rumbled along well past midnight.

After months in the wilds where every nocturnal sound means something, this was more than my heightened senses could take.

With Kristin still in Canada, I determined to put a brave face on the discomforts of my new life. It would only, after all, be for four months. The neighbourhood, surely, would make up for it.

When I trotted off to the university on the first day of term, my fellow professors soon put paid to that notion.

“You live where!?” said Ron, a colleague and former public relations man with the Anchorage Police. “But that’s the ghetto. That’s where the Bloods hang out. That’s a bad part of town.” He stretched out the word “bad” making it sound even more sinister than it otherwise would.

Glen, another colleague, was equally unimpressed. “You live up by that Carr’s [supermarket] on 13th? I only go to that area when I’m looking for a really shady bar.”

Fred, the head of department, muttered to me with a furrowed brow: “It wouldn’t look good if the Atwood Chair was knifed on his way home from work.” I could tell he was only half joking.

The next day I took the local bus to work and began to see what my colleagues meant. In Alaska, it seems, only the poor, destitute and clinically insane travel by public transport.

Each day there would be a new collection of misfits and weirdos on Bus No 15. Drunks, bag ladies, down-and-out Natives (Alaska’s indigenous population) and people who argued loudly, usually with themselves.

Heading to the local Carr’s a few days later, I witnessed a fight between two local bums. It was really only screaming and shouting as they were both too drunk to land a punch.

As poor districts went – and I have seen a few in my years trawling round the third world in search of news stories – this one wore its suffering on its sleeve.

Being truly poor anywhere in the world must be tough, but to be in the suffocating grips of penury while living in the richest and most powerful country on earth must be doubly galling.

Each day as I walked to the grungy supermarket (I was carless at the time) I would see the people who had fallen between the cracks of the American dream. I began to feel a quiet empathy for them.

I even developed an absurd sense of pride in my new neighbourhood. When people asked where I lived I would say “Denali and 15th” daring them to respond.

If they didn’t rise to the challenge I sometimes added: “You know, by the Carr’s on 13th. Down in the ‘hood.”

But just as I was settling in, my flirtation with life in the ghetto came to an end. For one, Kristin wired me a chunk of money and my bank balance climbed out of double digits.

Then came two momentous events: the purchase of a fancy Land Cruiser (our plan is to use it to take guests wildlife-viewing back at the ranch) and the arrival of Kristin, a far more sensible and down-to-earth human than I.

As to the former, I couldn’t even park my beautiful new purchase in my adopted part of town. The temptation for the locals to strip it of its exterior paraphernalia would, I am sure, have been overwhelming.

I had visions of bumping into my tough new neighbours at the supermarket with the large gold-coloured emblems that had recently adorned the back of my car hanging around their necks on chains.

Down-heartedly I parked the Toyota elsewhere and continued to take the bus to work.

A week later, and with Kristin now in Alaska and unimpressed by the ghetto, we moved. We found a beautiful little apartment in a gorgeous house in posh southern Anchorage.

Sally, the charming landlady, runs the place as a highly successful Bed and Breakfast in the summer (if any of you are coming to Alaska look up Alaska Many Moose) and rents out bits of it in the winter.

Nothing, but nothing, is within walking distance and if the buses do come down this far I bet they run empty, shunned by the well-to-do locals who wouldn’t be seen dead sharing a vehicle with a stranger.

It’s very pleasant here and many days we look out of our windows and see moose walking through the snow. There’s not a poor person in sight and most of the land is marked “Private Property – Keep Out.”

If the temperature is a little chilly we can even start the Toyota from inside our house, saving the inconvenience of those first few minutes with a cold bum.

I can’t pretend that I preferred the apartment on 15th. But I no longer have that note of proud defiance in my voice when I tell someone my address.

My street cred in the eyes of the local toughs, never high, has evaporated altogether.

Last week I dropped by the old apartment on 15th to give back a key to the postbox I had mistakenly taken with me.

As I hurried back to my leather-upholstered 4×4 and pulled away from the curb I found my nose rising a shade as I surveyed my former neighbours.

I couldn’t help but wonder: “How could I ever have lived in a part of town like this? These aren’t my sort of people.”

The transformation from streetwise urban gangsta to the male equivalent of a soccer mum was complete.