Posted at 21:15h in Bearly Surviving Archive by sitemaster
0 Likes 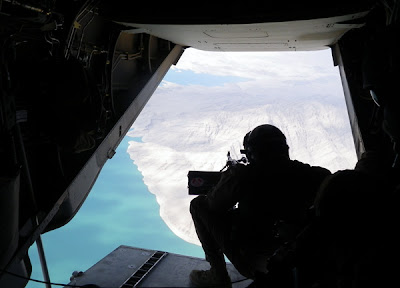 Whichever way I look at it, I’m a long way from home, more than a dozen time zones away from our beloved snow-enveloped ranch.

My journey started in late November with a two-day icy drive across British Columbia. The came a side trip to Estonia, another to Hungary, and several weeks of training, briefings and preparations in the UK.

In the last few days there have been a clutch of different flights, each progressively less comfortable, culminating in a beautiful night-time arrival in a distant dusty outpost by military helicopter.

I shouldn’t say exactly where I am, I suppose, but I’ve been told that I can share the fact that it’s somewhere in southern Afghanistan.

Probably best not to mention specifics of the job either, though the work I will be doing here is all perfectly above board.

Suffice it say that I am working on a British government contract as part of the Leviathan preparing to win back southern Afghanistan and hand it over to central government control.

I must admit that my arrival, for all it’s cloak-and-dagger appearance, has been strangely reassuring, a lot less chaotic than my first trip to Afghanistan nearly a decade ago.

That time I flew in from Tajikistan in an ancient Russian Yak 42. It had been riddled with bullets and the holes were patched up with what looked like gum.

The men operating my flight back then were a bunch of chancers from the Northern Alliance, a loose anti-Taliban coalition of mostly Tajiks, led until a few days before by Ahmed Shah Massood, the lion of the Panjshir.

But Massood had been killed by a suicide bomber on the eve of 9/11 and the Northern Alliance, like the plane I was in, was on the verge of break-up.

As we finally touched down in a northern corner of the country on a metal military runway laid by the Soviets, I felt the plane slew sideways.

“We always do it that way,” the Afghan pilot later confided. “The Russians didn’t build the runway straight. They said it was because of the mountains.”

That time I stepped off the plane into a graveyard of hulking Soviet military armour and a gaggle of local children. Later I made it to a guest house that barely deserved the name, for goat and rice.

This time around everything was far more civilised.

I was met by a pleasant northern Irishman and driven in a well-made 4×4 to a smartish compound, replete with power, hot water and some very British tea-making facilities. It even had a telly and the internet.

Of course, after several weeks of silence, you may be wondering how this blog has transformed itself from a gentle account of British Columbian bears and wilderness into a bit of dusty Afghan frontline.

The truth is that the impetus – and it is very much a temporary change – came across my table (well my laptop really) out of the blue.

I hadn’t been looking for a change and had been planning on spending four months in Vancouver this winter with Kristin while she attended chef school, something she had been looking forward to for some time.

But the temptation, when it came, was just too great. The job description too alluring to turn down.

First off I would be working at the busiest coalface of 21st century foreign policy, at the sword’s edge (to mix my metaphors a bit) of the so-called clash of civilisations.

Secondly, it would be a unique chance to get to grips with Pashtun culture and the renowned pashtunwali, a tribal code of honour that has dominated these mountains since time immemorial.

All that combined with a chance to immerse myself in modern counter-insurgency theory and, then, perhaps, jut perhaps, give just a little back to a country, I strongly feel, deserves our best efforts.

It would also be nice, I reflected, to try and do a bit, to take some responsibility, with all the frustrations that would entail, after more than a decade of my life spent chronicling (and sometimes criticising) the efforts of government from the outside.

Kristin, for her part, has been wonderful. From the first moment I told her about the job, she has supported me in my efforts as I made my way through the interview process and training it required.

It was almost as if she understood intuitively that much as I love our life at the ranch, and I really do adore it, I need to tend to my other slightly grittier side, just occasionally.

All those years spent on frontlines around the world left me with something that, try as I might, I can’t quite describe: an itch that occasionally needs scratching, a dormant muscle aching to be flexed.

I am not abandoning the ranch. I will spend all my leave, which is fairly generous, struggling to make amends for my absence.

In the meantime I am trying to learn Pashto (very much still at Chapter 1 Lesson 1 with that) and get my head around the workings of a labyrinthine logistical operation and an alphabet soup of acronyms.

Nor am I yet even at my final destination, a spot of lush valley deep in the southern desert with a wonderfully-chequered recent history.

Today, I am told, might be the day, helicopter flights permitting. But then I was told that yesterday. And the day before that.

In the meantime we have heard from friends at home that last week three and a half feet of snow fell in our little BC valley in just 24 hours. Even by our voluminous standards that is a lot of precipitation.

Today Kristin is wending her way up the snowy passes from Vancouver to pick up Masha and Karu, our two wayward hounds, who have spent the deep winter with our wonderful friends, Mark and Kris, in Meadow Creek. It’s far from clear she will make it through.

So, dear guests and friends, for those of you coming to the ranch this year, I hope to catch up with as many of you as possible. I’m not exactly sure when I will be home – my leave dates have yet to be finalised – but I will be coming and going.

If we miss each other, I will leave you in the extremely capable hands of my wonderful wife, Chef Kristin, and our great wilderness guides.

And when I do make it back to the ranch on leave, and have shaken the fine Afghan dust from my hair, I promise to endeavour to update with the latest from our beautiful remote valley.