Posted at 10:47h in Bearly Surviving Archive by sitemaster
1 Like 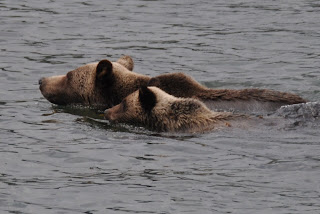 We can’t be one hundred percent certain. But we’re pretty sure it’s her. No other bear has quite the same poise, charm or attitude.

Whether she’s strolling along the dirt highway or fishing lazily in the river, she lacks that skittishness that haunts so many grizzly bears in Canada in an age when they are hunted.

If grizzly bears in Canada really are the monarchs of the wilderness, she seems to embody that calm sense of indifferent entitlement like no other forest animal.

We have been watching now for five years.

Our first sighting of Apple, as she later became known, was the autumn before the spring we moved in, only the second time we ever visited the ranch.

As we rounded a corner in a tiny secluded spot, there she was, sitting contentedly in the middle of the road, under the eponymous apple tree she had just plundered.

She had eaten so much, gorging on the sweet autumn apples that still mature every year in the small deserted ghost town, that she could barely stand up.

As Kristin and I sat there entranced, she grunted and scratched, and then simply slouched back down again, as if worn out by the effort of trying to stand.

Since then Apple has revisited the little valley we live in every year.

She often arrives mid or late September and we see her off and on until the end of October when she heads up into the mountains for five month’s sleep.

The guests we have had who know her adore her. More than one has sat gently and wept at the sight of this beautiful wild animal, moving in her own habitat at her own pace.

We know she is a female – they pee in a different way than males do – and we often wondered idly why she never had any cubs.

Female grizzly bears in Canada are often not sexually mature until they are five or more years old, but she seemed a little bigger and older than that, perhaps in her early teens.

One of the great things about Apple, whose image once graced the front of the Wall Street Journal after a friend took a winning photo of her, is that she extremely tolerant and forgiving.

If there was ever a perfect bear to train guides with, she is surely it.

One time I stood watching her with a couple of bear biologists, not 40 feet from where she lay resting. After a few minutes, she raised herself up, turned her back on us and peed ostentatiously.

Then she scratched her back on a branch and began a cowboy step down the slope towards us. We took a few steps back to lat her pass and she calmly went on her way.

Another time I was in the middle of the road when she appeared in the distance and walked straight towards me. She stopped about 100 feet away and, after a few seconds, rotated so she was sideways on.

Then she turned back to face me, before turning the other way, again showing her profile.

I asked a bear biologist what all this meant in grizzly language. Any guesses? She was showing me her bum to demonstrate just how big and formidable she was. As if to say: “I am grizzly bear. A serious grizzly bear. Check out my arse. Respect me!”

The low point in my relationship with Apple, and I very much doubt I play as big a role in her life as she does in mine, came early last October.

One day I was watching her as she slowly walked along the road, my car stationery, engine running. I checked my mirror out of habit and was horrified to see a pick-up tearing towards me.

In a flash I imagined the truck passing me and, unable to see Apple in front of me, smashing straight into her.

Instinctively I hit the gas and drove straight at her, determined to push her off the road so she wouldn’t come to harm.

She looked at me, first unconcerned, then puzzled, and finally angry, before, just as I reached her, she leaped off the road and disappeared into the trees.

I was sorry that, as a person she seemed to trust, I had been so forceful with her, but my reasons, I felt, were sound.

Of course that was not the way she saw it. Then next time I saw her, a day or two later, she stuck up her nose, turned on her heel, and disappeared. I had clearly displeased her. She avoided me for most of the next week.

Last year, when she made her annual visit, she was fatter than we had ever seen her before. So huge was her belly after a record summer of huckleberries that she could barely swim the river.

She disappeared early, clearly gorged out and content to leave the rest of the salmon for other less bears.

Imagine our delight then, when, as we were checking out her favourite habitat this week, we came across a grizzly bear with two small cubs-of-the-year.

First they swam across the end of the lake and the next day we watched as they fished together on the banks of the river.

The behaviour was exactly the same as before: majestic, unhurried, content to bask in the limelight of her adoring audience.

At one point, cubs in tow, she clambered up onto the road before retreating back to the river again.

Of course grizzly bears in Canada are incredibly similar to each other and they also change dramatically from one season to the next.

But Apple has two secret identifiers – a small notch in her nose, the result of an old injury and a scar a few inches above her right eye.

Until we can confirm the marks for sure, and we are going to need a really close view of a telephoto lens for that, we aren’t claiming for certain that it is her.

But in our hearts we are pretty sure. The poise, the grace, the attitude. We’ve simply never met another bear like her.